At LUMENS HPL, we offer high quality replacement Xenon HID parts to replace OE / factory / manufacturers original equipment. These parts are offered in equivalent color replacements (usually 4300K), or various color upgrades. At a fraction of the cost from original equipment offered by the dealerships, and with comparable if not better quality, LUMENS HPL offers the best alternatives when replacing or upgrading factory Xenon HID parts.

Currently, the factory Xenon HID market is divided into various bulb types (D1, D2, D3, and D4 being most common, D5 and D8) in which they are then divided into 3 other subtypes (S, R, C). The bulb types are not interchangeable. Either the physical connectors are different, or the voltage required is different. D1 and D3 types look physically identical, and D2 and D4 types looks identical. The subtypes differ slightly. S and R bulbs are not interchangeable, but the C (sometimes referred to as 'common') will replace both S and R bulbs. S bulbs are generally found in vehicles with projector housings, while R bulbs are found in the few vehicles with reflector housings. The C type bulbs can physically replace the R type bulbs, but do not have the ceramic sheild to limit the light from the bulb. 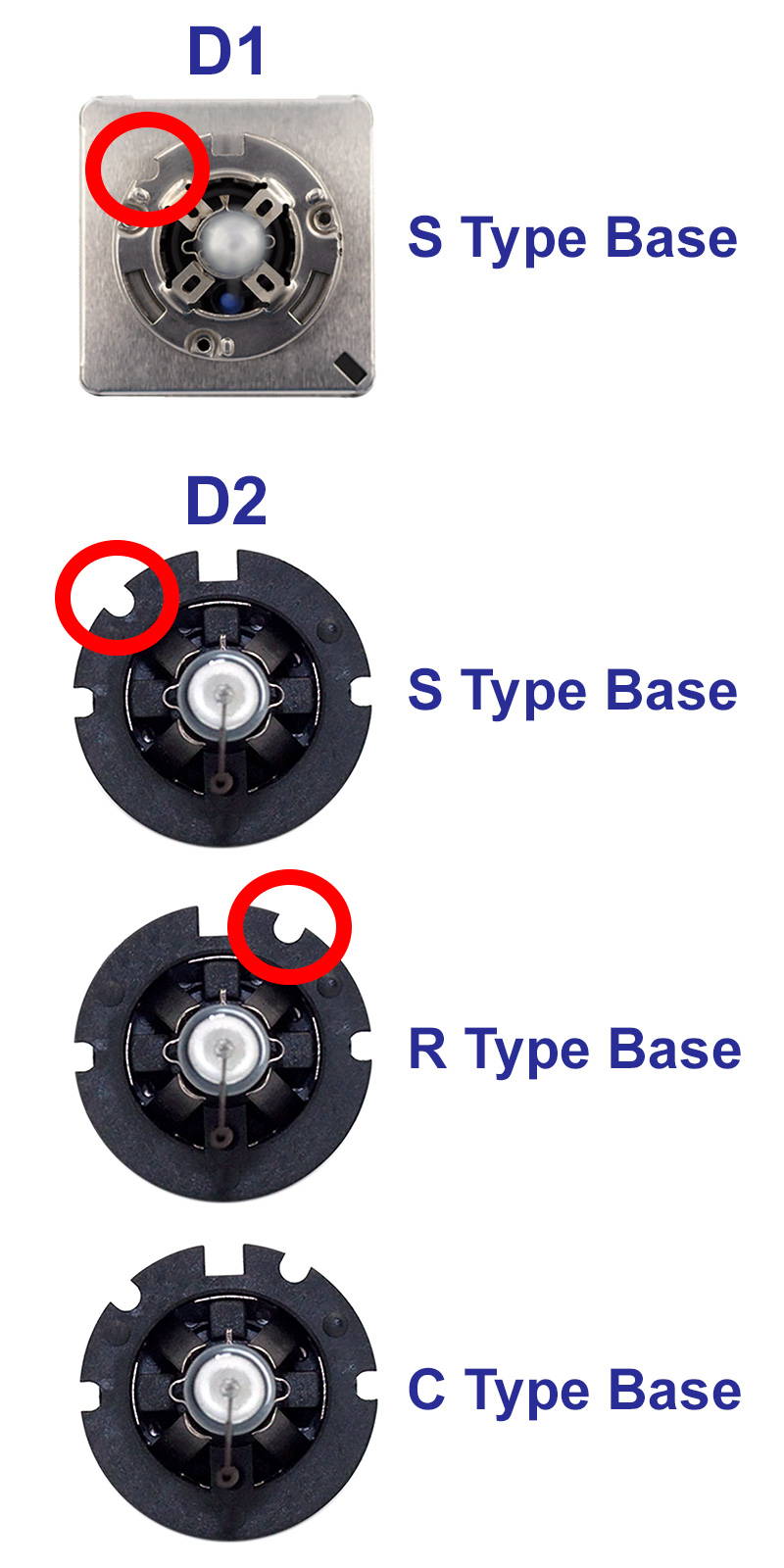 1. End of life cycle - We generally see a life expectancy of 4-6 years on Xenon Ballasts & Bulbs. This timeline varies from vehicle to vehicle based on: the number of hours used, how many on / off cycles seen, and the electrical condition of the vehicle.

2. Unbalanced parts - An older weakened part would likely cause a newer part to fail prematurely. For example, if a xenon light bulb fails, the unreplaced older ballast in the system will likely shorten the life of the new bulb. An older, weakened bulb, could also cause premature failure on a new ballast. For this reason, we always recommend replacing all components (ballasts & bulbs) in a Xenon HID system when one parts seems to have reached its end of life.

3. Electrical Issues - Voltage and ground issues cause by vehicle components outside of the Xenon HID system will cause the ballast & bulbs to fail. If you see consistent failure in your Xenon HID components, the problem is most likely in an eletrical issue with the vehicle. These issues include: corroded wiring and / or terminals, poor grounds, blown fuse, computer issues, poor power source (battery, alternator, etc), and more. This is very common with a vehicle that has been through a collision, vehicles that see heavy weather / salt conditions, and vehicles over 5 years old.

4. Water damage - Xenon HID parts are generally in a sealed headlamp enclosure. If for some reason, the headlamp is allowing water to enter the housing, the housing should be replaced before installing new Xenon HID components. 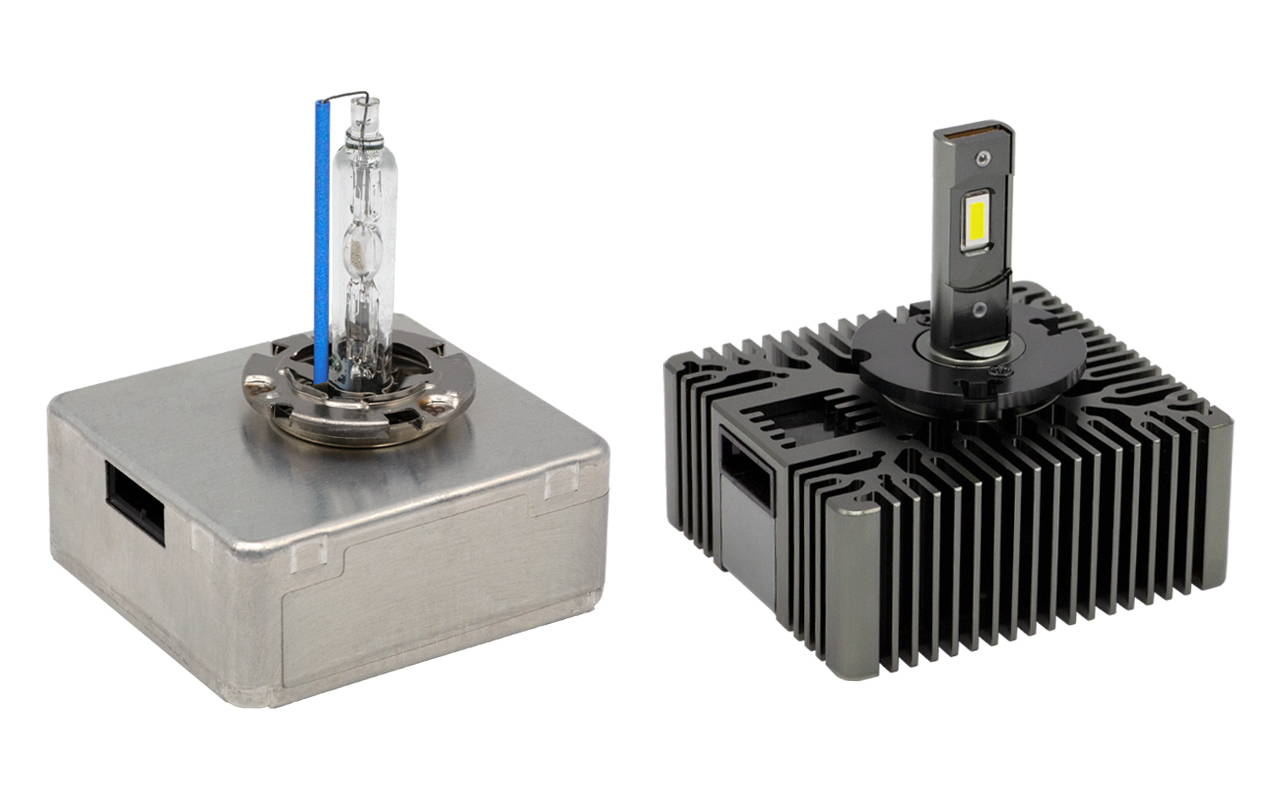 D5S bulbs were introduced recently. Unlike other factory Xenon HID bulbs, these bulbs do not require ballasts. D5S bulbs do not require AC power to ignite and burn the gases inside. As a result, D5S bulbs produce substantially less light than D1, D2, D3, and D4 type HID bulbs. The D5S Xenon HID technology is simpler in design from conventional Xenon HID systems, and can powered up by directly applying 12V to the bulb. Unfortunately, the biggest complaint about this bulb is that it's not very bright. Luckily, LUMENS HPL has developed an LED solution for this! Don't just replace your existing D5S with another dim OE D5S HID bulb, upgrade it to our D5S LED replacement bulb at a fraction of the cost! AND increase the light output at the same time!

D2 bulbs are currently the most commonly found HID bulb used by manufacturers. Unlike the D1 and D3 bulbs, these bulbs do not have ignitors built on the bulb itself. The same differences between D1 and D3 bulbs are true for these bulbs. First is the voltage required to operate the bulb: D2 bulbs operate at 85V while D4 bulbs operate at 42V. Secondly, D4 bulbs are newer more environmentally friendly versions of D2 bulbs; D4 bulbs are mercury free.Because of these differences, D2 and D4 bulbs cannot be interchanged UNLESS their ballasts AND IGNITORS are replaced with the corresponding bulbs to create a full D2 OR D4 system (you cannot mix components from 2 systems together). 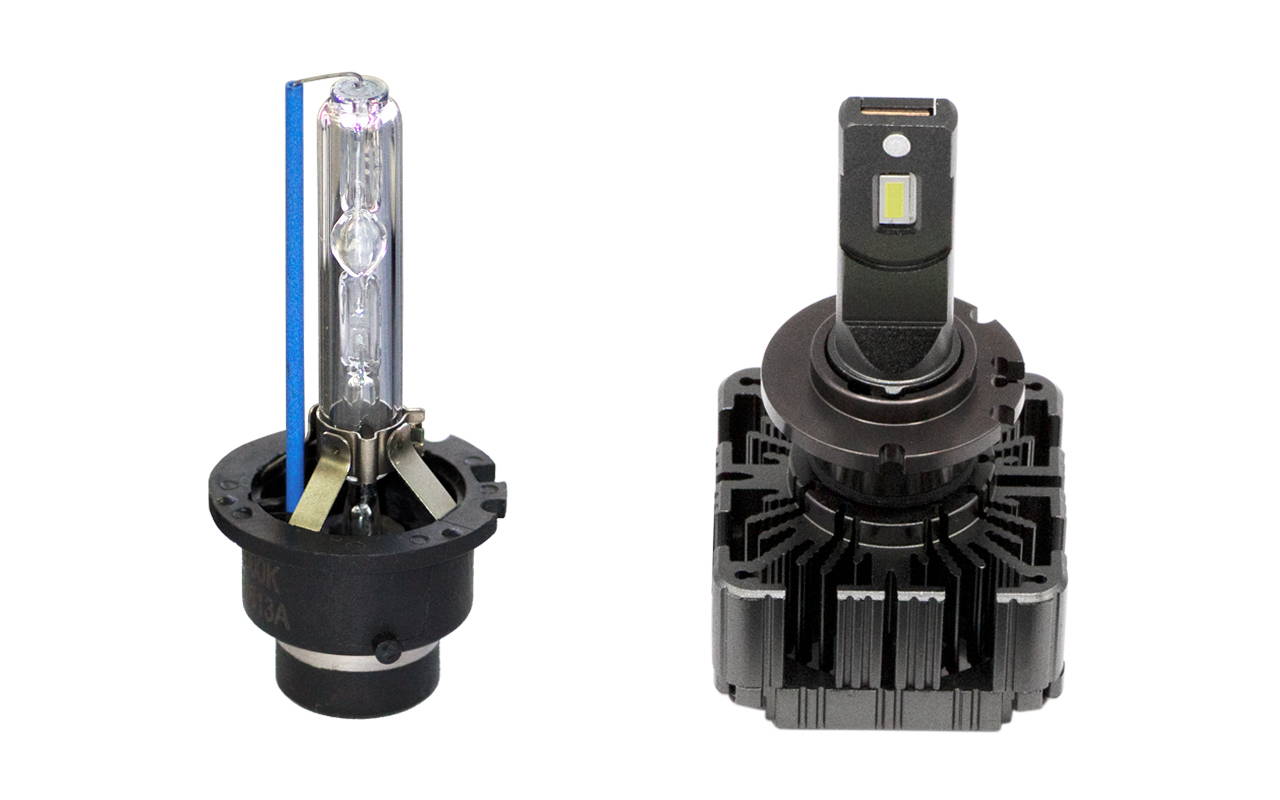 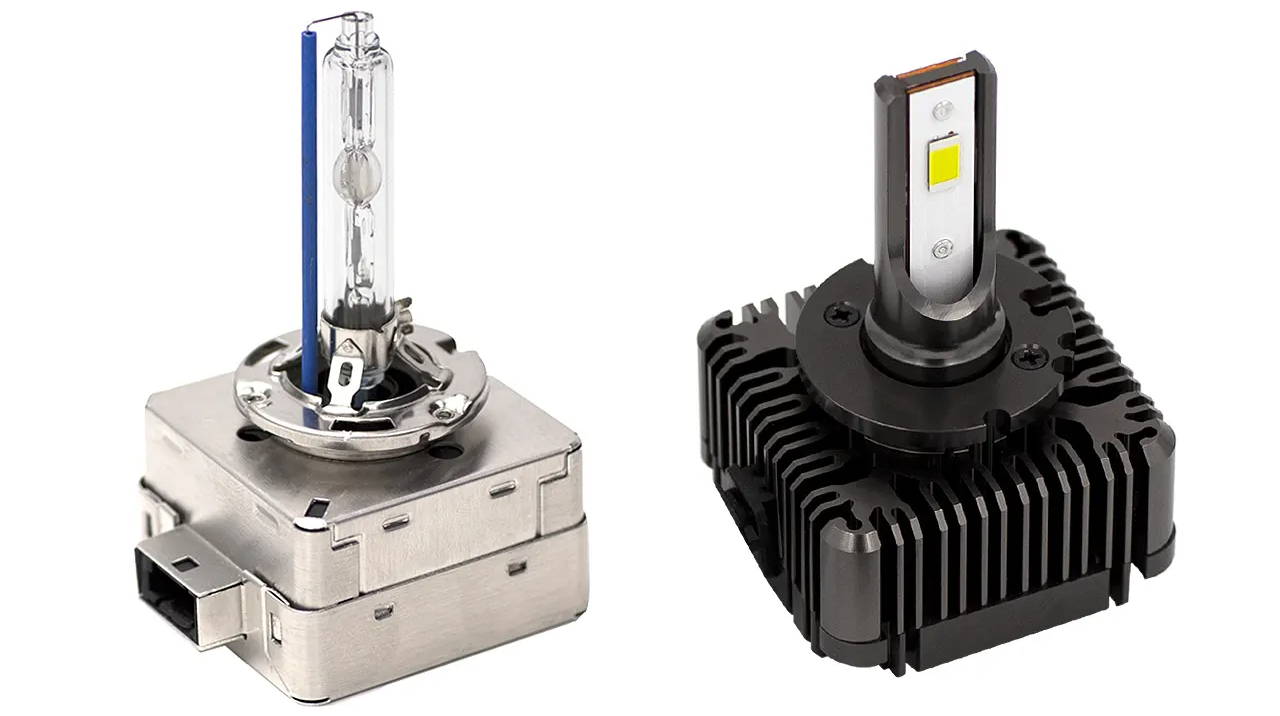 Aside from being just a bulb, these bulbs are easily distinguished by the metal box attached to the actual glass bulb itself. The metal box is an 'igniter' which is generally built as a seperate piece in D2 and D4 systems. These bulb types are much more expensive than its D2 / D4 counterparts for this reason (and also because the other bulb type is more common). There are 2 main differences between D1 and D3 bulbs. First is the voltage required to operate the bulb: D1 bulbs operate at 85V while D3 bulbs operate at 42V. Secondly, D3 bulbs are newer more environmentally friendly versions of D1 bulbs; D3 bulbs are mercury free. Because of these differences, D1 and D3 bulbs cannot be interchanged UNLESS their ballasts are replaced with the corresponding bulbs (you cannot mix components from 2 systems together). 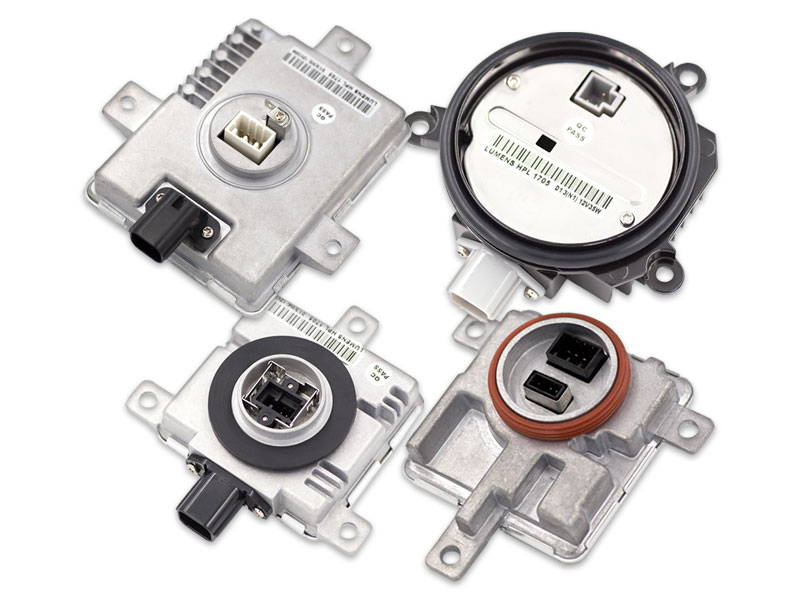 Lumens HPL replacement OE Xenon HID ballasts is the best choice for consumers when comparing quality & pricing. All OE styled ballasts are built using the same digital technology found in our HID conversion kit ballasts. These ballasts are designed to consume and output the same amount of power as your original OE ballasts. We offer direct replacement factory style OE ballasts for many different applications. 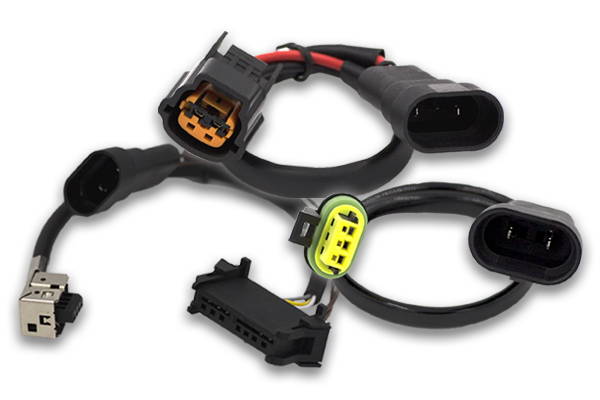